← NEW OR USED … THAT IS THE QUESTION
HEEL SLINGS VS. SPD SHOES & PEDALS → 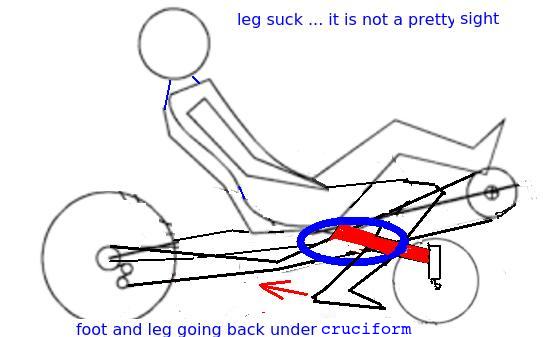 Just recently I saw it happen and it wasn’t a pretty sight. A friend I ride with was riding another friend’s tadpole trike … trying it out. He normally rides a diamond frame bicycle. He has been considering buying a tadpole trike so we are encouraging him to ride this one to get a “feel” of riding one and make sure he wants to pursue it. He has ridden with us for years and knows there are numerous advantages of riding a tadpole trike over a diamond frame bike. We have been hoping he would make the plunge so we are excited about him finally riding this trike as he considers it. Even though he was told about the danger of “leg suck” and was given a pair of SPD shoes to wear and use while riding this trike he chose not to wear them. While pedaling his right foot slipped off the pedal and down onto the pavement. The next thing he was, shall I say, “audibly announcing” that he was in trouble. I saw his leg and foot get bent back and contorted as they went under the cruciform of the trike and drug along the pavement. Fortunately for him he got stopped and nothing got broken nor was any skin damaged. It hurt for just a little bit, but it started feeling better as he kept riding and pedaling. Yes, he was fortunate. A few days have passed and now his ankle and foot is swollen, black and blue and hurts some again. This scenario has resulted in some very serious injuries for others.

Leg Suck, as it is called, can be a very dangerous thing. Here is what Wikipedia has to say about it:

“Although recumbent bicycles are generally considered safer than upright bicycles, they do have some specific safety issues. A type of injury characteristic of recumbents called “leg suck” occurs when a foot touches the ground and the bike runs forward over the contact point, causing ligament damage and, in some cases, ankle fractures. The use of clipless pedals reduces this possibility by preventing the foot from slipping off the pedal. But with clipless pedals, remaining clipped in during a front tire or wheel failure at high speeds can result in the recumbent rolling over the rider and taking a clipped in leg or legs with it. This scenario, although very rare, can create severe spiral fractures of the femur rarely seen with upright bicycles. ”

Quite frankly leg suck sucks! I have been most fortunate. I rode my trikes for years without the use of SPD shoes and even though my feet came off of the pedals a few times I never experienced them going down onto the pavement below. Years ago when I checked into SPD shoes I found them too costly. I have a wide foot so the regular width shoes won’t work for me and the extra wide shoes were very expensive at that time. Just a few months ago I learned of some that were quite reasonable in cost so I bought them and have been using them since. Certainly I do feel much safer using them. My only concern it having my feet locked onto the pedals and having an accident where the trike tips over and my feet remain on the pedals because I can’t get them loose (released). 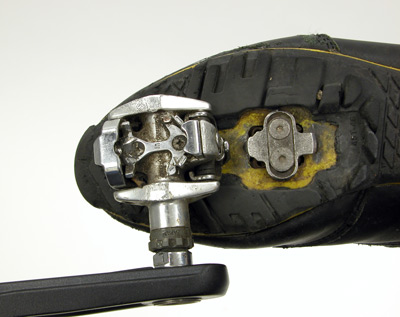 One thing I would point out is the boom height and position of one’s feet on the pedals as to their distance up off of the pavement. Certainly the higher the boom the more distance exists between the bottom of the shoe and the pavement. Most trikes have similar boom heights. Only a few are much higher and those that have high booms do appear quite unique. And I am pretty sure that many riders don’t care for riding in that position as for one reason or another they find it uncomfortable and objectionable. Of course, the larger (longer) one’s feet are the closer they will be to the pavement while positioned on the pedals.

Besides SPD shoes their are other options such as heel slings (straps) for the foot to sit in which keep the foot (shoe) from falling down onto the pavement. This is my personal preference as I don’t like using SPD shoes and pedals. You can read the BentRider article HERE. I will be featuring these heel slings in my next posting on this blog. 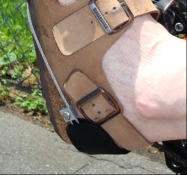 I like these TerraTrike version of the heel slings (pictured below) better than the cable type (pictured above). 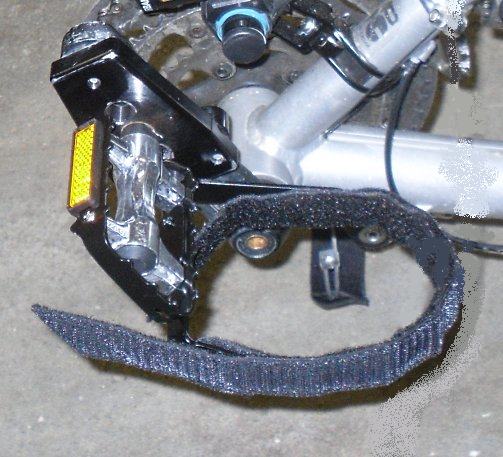 By the way, I tried to find a picture of this “leg suck” online to post here, but couldn’t find a thing. I then got the idea that I would ask my friend to do that again so I could get a picture of it. He declined to help me out on this. I am thinking … “what kind of a friend it this that won’t help out his friend when his friend asks for his help?” Seriously, I sure hope the next time he tries riding the trike he will be wearing the SPD shoes. I really don’t care to see a repeat of this. Leg Suck … it’s not a pretty sight. And we all want to …

← NEW OR USED … THAT IS THE QUESTION
HEEL SLINGS VS. SPD SHOES & PEDALS →