Would you buy a brand new “Catrike”
like this for about half price?
China has long been known for blatantly illegally copying products of others and selling them … often on the black market … at least many years ago. But today they are so bold as to even display a picture of the real McCoy with manufacturer’s name clearly displayed on it. Those who don’t know any better might be deceived and go ahead purchasing the item thinking they are getting a really great deal. Of course, what they get is altogether different. It may look somewhat the same externally, but the components used are el cheapo. And I am pretty sure that even externally there would be some obvious differences in the trike you would receive. Here is an example of what I am talking about. I think this is a picture of an older model (2012 or earlier) Catrike Trail trike. It is the non-folding “space frame” design (my favorite). As you can see it has the Catrike name shown clearly on it. I think sells for about $1200, but I am not sure of that as they don’t show the prices on their website. I have emailed them to ask what the price is, but they haven’t answered back. Anyway, that is less than half price of what Catrike sells their trike for today. I would think that the Chinese businesses involved in this illegal knockoff production would at least take a couple of minutes with a photo editing program and remove the manufacturer’s name from the picture they use. Better yet, why not just use a picture of the trike they are building and selling? Here is the Chinese website (one of them) where this is found:
http://www.made-in-china.com/…/hot-chi…/Recumbent_Trike.html
And here is the specific trike’s webpage:
http://www.made-in-china.com/…/China-New-Design-Hot-Sale-Re…
I know Catrike is aware of this, if for no other reason than the fact that I emailed them about it several years ago when I first discovered it. 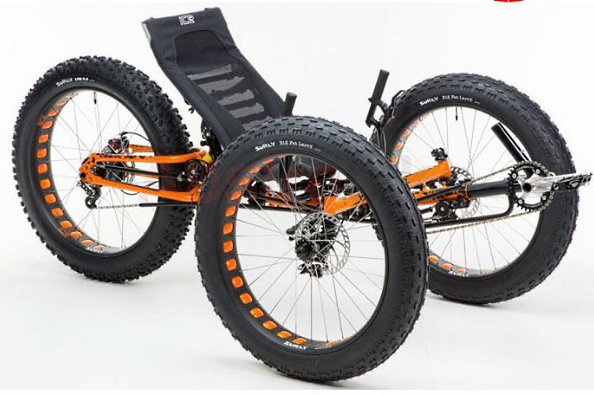 Does this not look like an ICE FULLFAT trike? It is another Chinese knockoff they are selling. No doubt it would probably look a lot like the ICE FULLFAT trike. Again, they don’t show any prices so I have no idea what they are charging for it. I am sure it is quite cheap especially when compared to the cost of a real ICE FULLFAT trike (about $5000 for the base model).

I wrote an article about another Chinese FAT trike. It is shown in the picture above. As far as I know it is not a knockoff though. It is a “mini-fat” … that is it has 20 inch FAT tires all the way around instead of 26 inch. It certainly is cheap … $1,460.93 total which includes shipping ($950 for trike & $510.93 for shipping).
Alibaba is another well known Chinese website selling lots of different Chinese made products. They show the prices and as far as I know are legitimate … they just sell cheaply made trikes like the FAT trike I wrote about and linked to above. I have not seen any advertised that I identified as a knockoff.
https://www.alibaba.com/trade/search?fsb=y&IndexArea=product_en&CatId=1204&SearchText=tadpole+trike
The prices are definitely cheap, but the shipping costs are pretty high so the total cost isn’t as attractive as it starts out.
So … back to my original question … would you buy one of these Chinese knockoffs to save money? I don’t think I could do it. I could probably buy one of the other Chinese trikes though. It is just the knockoffs that I don’t think I could deal with. Well, I don’t have any money to buy any of them anyway so I won’t concern myself with it. I am happy I was able to get the real McCoy and it continues to serve me well year after year. I do really miss my 2009 space frame though. I always …
ENJOY THE RIDE!
A FREE GIFT awaits you!