← TRY BEFORE YOU BUY
TREK THE TRAILS →

While riding along the Maumee Pathway this afternoon (4/27/2020) I passed another tadpole rider going in the opposite direction. We waved at each other but didn’t stop to chat. I had noticed that he was loaded down and pulling a trailer. I got up the trail a little way further and decided to turn around and catch up with him. As I came up behind him he pulled over to the side off of the trail and stopped. I did the same and we sat there talking together for about an hour getting a little acquainted. For the past 2 and one half years he has been crisscrossing the United States riding his yellow Catrike 700 loaded down and pulling a trailer. He said he is on his 6th journey at this time. He is headed back east now. He is from New Jersey. It was neat meeting up with him. He has lots of stories to tell. I told him about my having this blog and asked his permission to write-up an article about him to post. William said that he is 58 years old (if I remember correctly). He shared with me that he  was interviewed by Gary Solomon of LaidBack Bike Report. HERE is that interview. Gary interviewed him when he was in Utah headed to Washington on his 5th journey crossing the nation. He had started out his 5th cross country journey in Orlando, Florida where Catrike had just replaced his original red Catrike 700 with a brand new yellow 700 as a serious mechanical problem had developed.

William told me that he is looking into adding an electric hub motor to his trike so we talked a little bit about hub motors and batteries. As you probably know adding an e-motor to a trike is not cheap. He could definitely use any help others are willing to offer.

As we sat there talking I had to get on down the trail as I know he did so we parted company. I think we both could have stayed there alongside the trail talking for a lot longer but all good things must come to an end as they say. 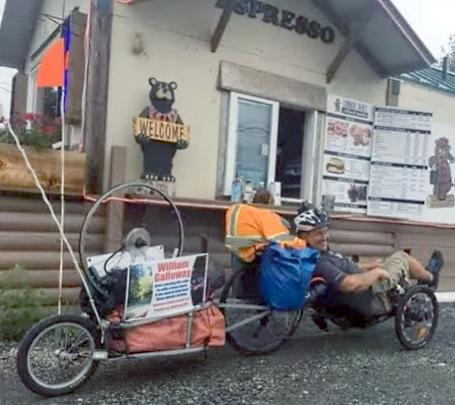 Here is a video he made. There is a lot of wind noise in it so bear with it.

I found it interesting what he said about this journey he has been on. It started out riding from the East coast of the U.S. to the West coast and then back again to get back home, but once he got back home he made the decision to just KEEP ON TRIKIN’ so now he is on number 6 crisscross of the nation. I surely wish him well and safety on his journey.

HERE is an article on William.

” I want people to know that there are people with disabilities who need help but are not getting it.”

Here are a few links for William Galloway:

← TRY BEFORE YOU BUY
TREK THE TRAILS →