When it comes to recipes adding water is quite common and works well oftentimes. However adding water in not a good ingredient when it comes to certain other things like electricity, picnics, sun bathing, and cycling to name a few. This year has been a terrible year for rain … too much of it (or not hardly any) … in some parts of the United States. That includes the area where I live. We have had record breaking rains and just recently we finally have got some decent weather and things are starting to dry out. However we still only have very limited trails open and available to use. All the flooding, high winds, etc. have devastated much of our trail system and it will take a long time and a lot of work to get them cleaned up and back open.  The rivers have just recently finally dropped down below flood stage so the cleanup effort is just getting started.

These 4 pictures below are not of our area, but they are typical of what our trails look like as far as being flooded over.

In the video below keep in mind that the trails run right alongside of the rivers so when you see the river which is considerably flooded over in various areas much of the time the trail is underwater.

And here is a video shot from a drone helicopter of the flooding in Foster Park … one of the places I had never witnessed flooding occur before. Most of the park and golf course was under water. There is horrific damage to much of the grounds. I was just out there July 22nd and saw some of the result of the flooding.

This picture below is in one of our local city parks. This is one of the trails which passes thru it. Even after a few days of nice weather the water is still across the trail although not nearly as much as pictured here. I would guess that the water was about 30 inches deep over the trail when this picture was taken. 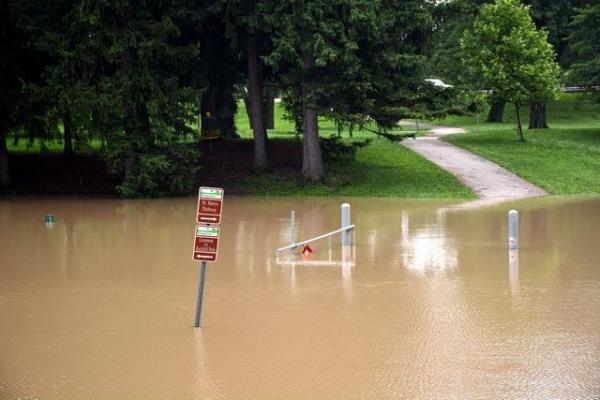 The city did make an effort to start cleanup work on one of the trails only to get two trucks and a skid loader stuck.  First one got stuck and then the second got stuck trying to pull out the first one. The skid loader got stuck trying to pull out the trucks. Upon getting them out of their predicament they gave up until the mud has dried up more. There is not only ‘gobs of goo’ (river silt mud which is some of the worst mud imaginable), but there are large trees down and plenty of smaller ones as well.

As an avid trail user it is difficult to deal with. This is the second worse flooding on record for this area. As I previously stated, I have seen areas flooded over that I have never seen flood before. Several city parks and golf course were pretty much destroyed by flooding and will take a lot of work and money to repair/restore them.

With this recent dry spell it is hoped that the rain pattern we have been experiencing this year is over with and things will return to normal. I have posted this picture of a flooded section of trail before but I added another picture alongside of it so you can see what the area looks like when it isn’t flooded. There must be at least 3 or 4 gallons of water there. The area where I have a white X is more than 7 feet of flood water over the trail. The river is off to the left hand side. The farmer’s field on the right becomes a very large lake. Somebody just added water and ruined a good thing.

Ya’ know … speaking of just adding water … I once came up with what I thought was a great idea which would really make me a wealthy man. I came up with a product I called “instant water”. It was a small tablet which you simply put into a glass and added water then stirred. Much to my disappointment I just never could seem to get anyone interested in it. 😉